Non-defense STEM (Science, Technology, Engineering, and Mathematics) research funding has now been stagnant for a decade, after decades of growth under administrations of both parties (see this overview by the American Association for the Advancement of Science, especially Figure 1).

Funding grants are declining in many research fields—and only a few years ago, American research was threatened with deep sequester cuts. Early-career scientists face increasingly impossible academic job markets and heavily over-subscribed research facilities as they look to their future careers, even at this critical juncture in history when society faces so many scientific and technological challenges.

A recent white-paper draft revealed a steady decline in funding proposal success rates in astrophysics, with vast stretches of astronomers’ paid time spent on top-quality but unsuccessful grant proposals. The authors state that they “are concerned that we have reached a tipping point where the health and vitality of the community cannot be sustained.”

This pattern is mirrored in biomedical research, as described here by the Federation of American Societies for Experimental Biology (FASEB). 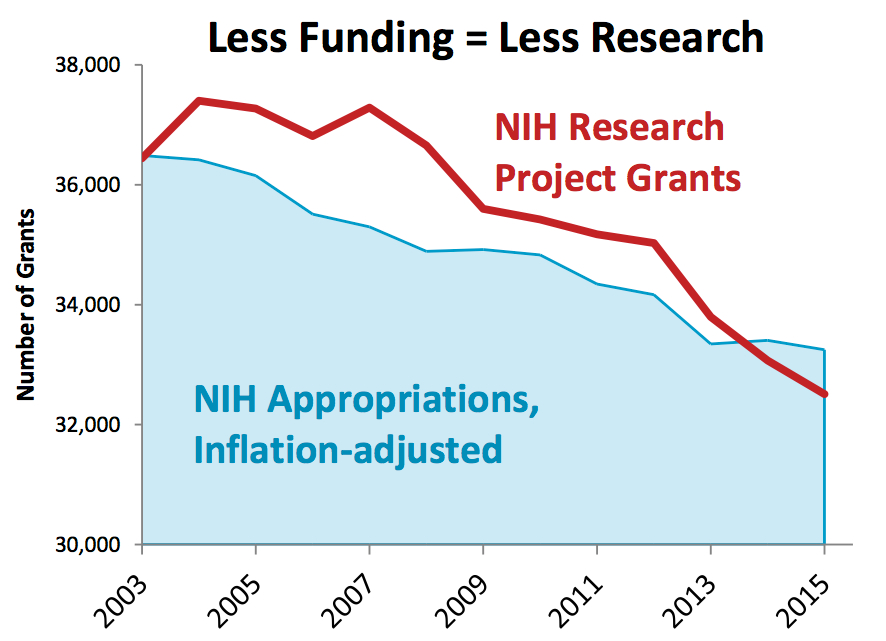 Federally-supported research is one of the foundations of our economy. Federal appropriations are a critical component of the nation’s place at the vanguard of science and technology, and with this campaign, launched by the union of graduate workers at Columbia University, intellectual workers are uniting to restore growth to these ambitious and (above all) necessary endeavors.

This page is under construction; to contribute data from your field, contact info@stemfunding.org.